Teaching clients to shift ‘from room to Zoom’

Home/Business, COVID-19/Teaching clients to shift ‘from room to Zoom’

Teaching clients to shift ‘from room to Zoom’ 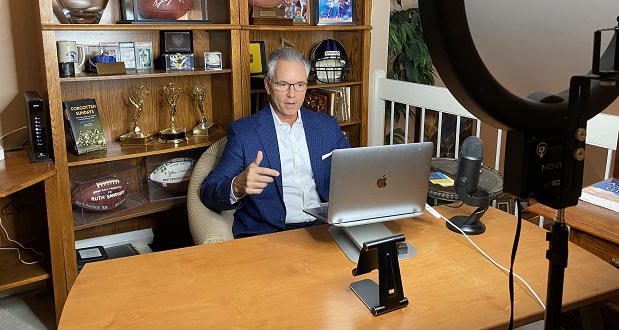 ‘I crafted all the principles that we’ve used in television forever (and) applied them to Zoom calls,’ says sportscaster and presentation coach Gerry Sandusky. (Submitted Photo)

The hurdles most businesses had to first overcome when they pivoted to online operations last year were technological — lagging internet, forgetting to unmute oneself in a video call, or accidentally going into an important meeting with a cat filter covering your face.

But Gerry Sandusky, owner of The Sandusky Group, a Maryland company that delivers training on presentation, public speaking and media skills to executives and leadership teams, quickly realized there was a second, equally important element to online meetings that most were overlooking entirely. Giving an authoritative and engaging presentation to a Zoom room, rather than a physical space, required entirely different skills.

It was a skill set Sandusky knew well — as a sports broadcaster with WBAL-TV 11 since 1988, he’s an expert at performing to a camera. But that skill isn’t one he’d previously brought into his work with The Sandusky Group, which only offered in-person trainings until March of 2020.

“My initial reaction was, ‘oh, bleep,’” he recalled. “I knew we needed to do something, but I didn’t know how long the pandemic was going to last. Is this going to be two weeks? Is it going to be a month?”

It was a mental health software company based in Los Angeles that originally asked Sandusky for help pivoting its training programs online, just a few weeks into the pandemic. Despite having never done trainings in a virtual space, he accepted the opportunity, not one to turn down a challenge.

It was during that first training that Sandusky realized that his clients were experiencing major discomfort presenting to a camera — and that that was an issue that he was uniquely equipped to respond to.

“I crafted all the principles that we’ve used in television forever (and) applied them to Zoom calls,” he said.

The two most important things to keep in mind when presenting virtually, he said, are, firstly, that you should be looking into your computer’s webcam, not into the faces on your screen, to make eye contact with viewers.

Secondly, rather than “work the room” as you would during an in-person presentation, a Zoom presentation requires you to “work the frame” — meaning keeping your focus and your movements and within your individual rectangle on Zoom.

If you don’t, Sandusky said, it can be like having a conversation with someone while staring over their shoulder.

The feedback he got from the software company in California was resoundingly positive. They were most impressed, he recalled, by how quickly he had transformed them from complete Zoom novices to experts. After just a few hours, they had gone from awkward on camera to poised and in-control.

Almost immediately, he officially added programing focused on helping clients transition “from room to Zoom” to his company’s offerings. Executives who want to learn how to better speak and present virtually can choose between a number of packages, ranging from a single one-hour training to programs that take a few days to complete, depending on how deeply they want to understand the principles of virtual presentations.

Sandusky estimates he’s done about 100 of these trainings so far. Among that number are companies with a broad range of technological know-how. But what most of his clients have in common is that they aren’t bad presenters — many have well over 20 years leading more traditional meetings. At some point in the pandemic, though, they realized that trying to lead meetings on Zoom without properly adapting to that medium was causing them to seem nervous, unremarkable or even incompetent on camera.

Just as he has continued to offer some services centered around traditional presenting even amid the pandemic, Sandusky imagines that he will continue offering virtual presentation coaching even after the pandemic’s end — whenever that may be. He will also likely introduce hybrid training, in which executives can learn how to make an effective presentation, how to deliver it in person and how to deliver it via video, all in one.

“That will evolve as companies recognize what I can easily see, and that is — in the pandemic, people had to move to the virtual world out of need. Post-pandemic, the virtual space is the Wild West of opportunity,” he said. “Companies will recognize, not only can we get our people doing much better presentations, but we can do better than the competition because we can be better in room and on Zoom.”