Retail expected to continue its evolution in 2021

Home/Business, COVID-19/Retail expected to continue its evolution in 2021

Retail expected to continue its evolution in 2021 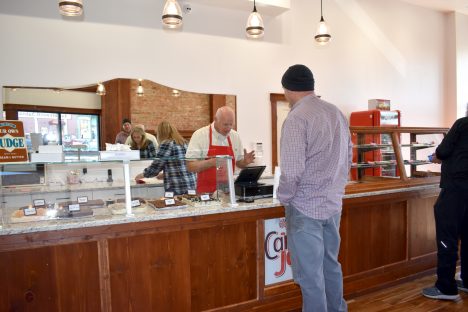 Judy Loomis (left) and Paul Loomis (center) at the Candy Jar in 2019. Photo by Catie Clark

Retail suffered a double whammy in 2020 between the ongoing retail apocalypse and the pandemic. Many businesses that were already teetering either liquidated or sought refuge in Chapter 11 bankruptcy. Other retailers survived and some even thrived. Several trends emerged that signaled how retail might pivot for success in 2021, including an e-commerce explosion, expanded delivery and pick-up options and the unexpected support for local small businesses.

According to both Google and Apple mobility-tracking statistics, shoppers increased their foot traffic in brick-and-mortar stores during Q3. When given the opportunity to escape stay-at-home orders, many shoppers did return to physical store locations; however, some shoppers still chose to shop online instead. The shift to more online shopping is likely to continue.

In 2021, online shopping will keep its increased market share until the pandemic recedes. Even when the pandemic is over, the e-commerce retail will not fall back to pre-pandemic levels. The pandemic pushed shoppers online sooner than they might have done so otherwise. Now that shoppers have become accustomed to e-commerce, a greater proportion of them will use online platforms than before.

This trend is already apparent in grocery stores. According to a market survey by Oracle, even when stores opened back up during the pandemic, 61% of consumers reported making grocery purchases online and 51% said they had rarely or never shopped online for groceries before the pandemic began. The switch to shopping online, even for essential goods, will continue after the pandemic is over: 92% of those surveyed by Oracle said they will continue online grocery shopping, with seven out of ten anticipating they will shop online as much as or more frequently than they have during the pandemic.

In-person shopping will not die, but a greater proportion of goods will be ordered online and then either delivered or picked up at a physical location. Many retail operations will function both as a brick-and-mortar retailer and as a fulfillment center for online orders.

A new trend is emerging in the wake of retail chain liquidations: the sale of the intellectual property rights of a defunct brick-and-mortar brand. Firms that buy these old brand names then turn around and resurrect them as an e-commerce business. For example, the 120-year-old mail-order and now e-commerce firm of FullBeauty Brands bought Catherines Plus Size from Ascena and quickly flipped the brand onto its online shopping site.

DressBarn is another example of this phenomenon. The new owner of the brand name is a recently created business called Retail Ecommerce Ventures, which has been buying up old brand names at bargain prices. Whether the brand identity and its customer base can really be preserved remains to be seen.

The same might also be said for Retail Ecommerce Ventures’ purchase of the rights to Radio Shack, Linens n Things, the Franklin Mint and Pier One, among others. The brand names may live on through an e-commerce site, but there is no replacing the thrill of finding some nifty oddball hand-carved chest at Pier One or the sheer fun of rummaging the electronics parts drawers in the back of a Radio Shack for just the right style of switch for the latest gadget project.

The year of the pandemic has some brick-and-mortar retail winners. These include those selling essential goods and home improvement supplies, off-price discounters and companies with already robust e-commerce platforms like LL. Bean. The retail beauty business is usually recession-proof, and the pandemic downturn has underscored this traditional wisdom, with both Ulta and Sephora still chugging along despite revenue losses from pandemic-forced closures.

The stores that have bucked the trend of retail devastation are those with strong e-commerce platforms and the off-price discounters. Notable stand-outs include Best Buy, TJX and Ross.

Best Buy looked like it was on its deathbed in 2012, but it avoided the trap of being sunk by the debt foisted on other distressed retailers by massive leveraged buyouts, like Toys R Us and Sears. It then reinvented itself by emphasizing e-commerce, making innovative use of its physical stores and investing in training and building up its employees. Best Buy has Idaho stores in Nampa, Boise, Coeur d’Alene, Idaho Falls and Twin Falls.

On May 21, Best Buy announced that its online sales during the COVID-19 closure of its stores were up 155%. On May 22, the electronics retailer announced a first-quarter dividend of $0.55 per common share, in contrast to many other businesses that canceled their first-quarter dividends, including Texas Roadhouse, Nordstrom and Cracker Barrel Old Country Store, according to Barron’s.

A solid customer base, consumer loyalty or discount pricing can be enough to keep a store or a chain afloat even without an e-commerce site. Both Ross Stores, owner of Ross Dress for Less, and TJX, owner of TJ Maxx, Home Goods, Home Sense, Sierra, Winners and Marshalls, have weathered the pandemic successfully even though neither company relies on e-commerce. Both businesses are aggressive off-price discounters.

Several Idaho small retailers have survived the worst of the pandemic because of loyalty and support from their local communities. Banana Ink, a quirky and unique retailer of Idaho-branded apparel in downtown Boise is an example of this. “Business has been good,” said Banana Ink manager Makenzie Stephen. “We had to get creative but we’re thriving because of the great support from locals.”

Banana Ink did take advantage of the PPP program to keep its sales staff employed during the statewide stay-home order in April and May. It also relied on its e-commerce site to maintain some cashflow while its brick-and-mortar location was closed.

The local support applies even in small towns. Paul and Judy Loomis restored one of Blackfoot’s original storefront buildings more than a century old. They then opened up a candy store late in 2019, anticipating a lot of sales from tourists visiting the Idaho Potato Museum across the street. The museum usually sees 25,000 visitors every year, especially because it is listed on the well-known roadsideamerica.com website.

The pandemic hit four months after they opened. “There were no tourists this year,” Paul Loomis told the Idaho Business Review. “No tourist bump in sales every developed.”

Despite the loss of tourist sales during the pandemic, Loomis credits local support in keeping his doors open: “The local community has kept us going, more than I every expected.” Unlike Banana Ink, Loomis’ store does have a website landing page but it is not set up for e-commerce because its ice cream, homemade fudge and other perishables won’t ship.