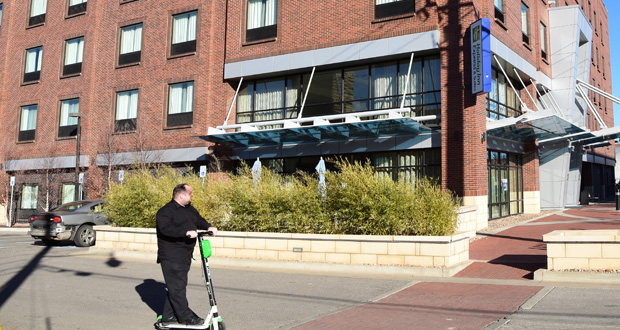 When COVID-19 forced a virtual halt to the country, the hotel industry was one of the first industries to feel the hit, and experts predict it may also be among the last industries to recover.

Although travel is picking up slowly, a new report from the American Hotel & Lodging Association shows that the hotel industry is teetering on the edge of disaster.

The State of the Hotel Industry report analyzed the economic and human struggle of the hotel industry six months into the COVID-19 pandemic. Key findings were not positive, in that the analysis found that millions of hospitality workers are still not working and occupancy rates were well below normal.

The report outlines the current state of the industry in terms of employment, consumer travel sentiment, occupancy, and industry trends in August 2020 compared to the immediate impact of the pandemic in March and April 2020.

The report showed that 4 out of 10 hotel employees nationwide were still not working. When the pandemic hit, nearly 9 out of 10 hotels had to lay off workers, and the hospitality and leisure industry lost 7.5 million jobs.

Today, nearly 65% of hotels in the U.S. are at or below 50% occupancy, which compounds the problem of hiring employees back. The low rates are due to the fact that only 33% of Americans say they have traveled overnight for leisure or vacation since March, and only 38% say they are likely to do so by the end of the year.

In June, usually a hopping month for the hotel industry, Norfolk/Virginia Beach, Virginia, was the only one of the major markets to reach a 60% occupancy level. Two additional markets surpassed 50% occupancy: Detroit, 54.9%, and Atlanta, 50.1%.

Chip Rogers, president and CEO of the AHLA, said the prolonged economic impact of the pandemic has taken an incredible toll on the hotel industry, with no sign of a recovery in sight.

“While hotels have seen an uptick in demand during the summer compared to where we were in April, occupancy rates are nowhere near where they were a year ago. Thousands of hotels can’t afford to pay their mortgages and are facing the possibility of foreclosure and closing their doors permanently,” said Rogers.

“We are incredibly worried about the fall and what the drop in demand will mean for the industry and the millions of employees we have been unable to bring back. The job loss will be devastating to our industry, our communities, and the overall American economy. We need urgent, bipartisan action from Congress now.”

In Oklahoma, the hotel numbers are just as dire.

The lack of visitors has a trickle-down effect for cities like Oklahoma City and Tulsa. America’s hotels contributed $660 billion annually to the U.S. GDP and contributed nearly $395 billion in wages, salaries, and other compensation. For every $100 hotel guests spent on lodging, another $222 was spent at the destination – totaling $278 billion per year.

“From January to May 2020, average occupancy for the entire state was 38.6%, which was down by 31% from 2019,” said Mike Carrier, executive director of VisitOKC. “When you look at the types of hotels like luxury hotels and larger full-service hotels like The Skirvin and The Renaissance, they were running 41% occupancy, down from 69% occupancy. The budget-price hotels were running 48% occupancy, down from 57%, so they had kind of held their own.”

“We’ve got 18,000 hotel rooms, so 15,000 employees laid off is a significant percentage of people employed in hotels,” Carrier said.

The layoffs were part of a trickle-down effect caused by the COVID-19 pandemic, especially in terms of corporate traffic.

“Nobody in the corporate world was traveling at all. You got to remember that about three weeks into this, the airlines were basically shut down,” Carrier said.

However, not all Oklahoma towns are suffering. Some are actually faring better since the pandemic began.

McCurtain County – home to Beavers Bend State Park, Hochatown and Broken Bow – saw a 145% increase in travel spending so far this year. The majority of tourists to McCurtain County come from the North Texas and Dallas/Fort Worth market, as many in that area opted for vacations that were closer to home in the drive market.

A big reason for that is the availability of private cabin rentals or short-term rentals. A report by AirDNA showed that traveler behavior has made regional tourism destinations more popular than their urban counterparts for all accommodation types. Since the outbreak, short-term rentals have maintained higher absolute occupancy levels and are much closer to reaching previous year levels in revenue per available room (RevPAR), the industry standard metric when grading performance.

Another reason, according to AirDNA, is that rentals can make social distancing easier given the availability of larger units as well as an availability of inventory in more rural and/or remote vacation markets. Second, most short-term rentals offer full-service amenities like kitchens and living space, which allowed for longer-term stays and became more popular as families looked for spaces to retreat. As a result, average length of stay increased by 58% during the crisis in rentals.

As an example, the Gatlinburg/Pigeon Forge, Tennessee, market, which is within a four-hour drive of Nashville, Atlanta, Charlotte, Raleigh and Knoxville, experienced a 1,294.3% increase in hotel occupancy from its COVID-19 low point. By June 21, occupancy had climbed back to 78.1%. Gatlinburg’s hotel occupancy during the comparable time the year prior was 89.1%.

In April, 8 out of 10 hotel rooms were empty. In August, 5 out of 10 hotel rooms are still empty with little expectations that occupancies will pick up until at least 2021. In fact, 65% of hotels were at or below 50% occupancy, which is near the threshold at which most hotels can break-even with expenses and pay for their debt.

Thousands of hotels are at risk of closure, and their employees are facing the possibility of permanent job loss.

While the Labor Day weekend is usually a busy time for hotels, currently, hotel reservations for the Labor Day holiday week were down 65% compared with last year, with only 14% of hotels being reserved for the holiday, the report showed.

“Oklahoma City was running 49% occupancy in July, which was a nice increase from where we have been,” Carrier said. “Again, the big thing is the lack of corporate business, but we have begun to see some event business come back. We are seeing more and more leisure travel coming in from people in a five-hour drive radius.”

When does Carrier expect numbers to return back to normal?

“Everything that we’re seeing says that the ‘normal numbers’ will not start getting back to what we expect until probably 2022,” he said. “But, we are seeing increased optimism from meeting planners. We’ve had a number of groups that are a significant size that have booked space in the new convention center for 2021 all the way through 2025.”