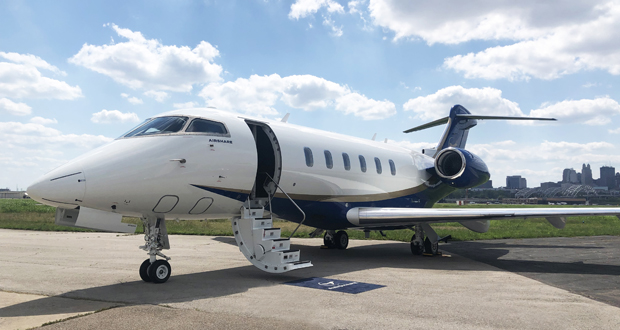 Industry forecasts show private aviation will grow as much as 10% larger than what it was before the pandemic. Airshare, which has offered service in Oklahoma since 2005, is adding the Challenger 350 super midsize jets to its fleet later this year. (Photo provided by Airshare)

A growing number of business and leisure travelers returning to the skies are turning to private aviation services as a preferable option to commercial airline travel.

Forbes reports new research shows private aviation is set to emerge from the COVID-era as much as 10% larger than it was before the virus.

Aviation research firms report July 2021 had the highest number of private flights in one month since 2008 and August is approaching 30% above 2019 levels.

In April 2020, business almost stopped, said John Owen, president and CEO of Kansas-City based Airshare, which now is growing its fleet and market.

U.S. private jet flights started their recovery in May 2020 and there are no signs of demand ebbing, Forbes reports. Argus TraqPak analysts estimate flight activity from July through December will increase 32.7% over the same period in 2020 and 9.9% over 2019.

Airshare has purchased three Bombardier Challenger 350 super midsize jets for delivery this year, with options for 17 more of the business jets in the next few years, Owen said. The larger aircraft will enable the private aviation company to carry more passengers and offer them a much longer range, he said.

“Our customers were asking for that,” Owen said, noting the company’s customers are 70% business and 30% leisure.

Airshare’s current fleet comprises Embraer Phenom 100 and Phenom 300 jets, which serve customers from Chicago to South Texas. It expanded to Oklahoma in 2005. The company’s maintenance facility is in Wichita, Kansas.

The addition of the Challenger 350 provides the opportunity to expand to the coasts, Owen said. The aircraft can accommodate up to 10 passengers and fly nonstop 7.5 hours, nearly twice the range of the Phenom 300.

Owen said business travel is back to about 80% of pre-COVID. “It really is little by little. A lot of it is dictated by their customers or job sites,” he said.

Leisure travel, on the other hand, spiked quickly and stayed at 140% of normal, he said.

Other benefits of private air travel include timely service and the certainty of flights as major airline carriers are cutting back routes and number of flights, he said. Plus, pets are welcome to fly alongside their owners.

Business travelers who want to get back to face-to-face meetings can do so while maximizing productivity and reducing contact touchpoints, he said.

Airshare does not disclose pricing for its services. In addition to charter and owner aircraft management services, it offers fractional ownership and jet card programs.

The company sells shares and jet cards in increments of days, not hours. The number of hours customers can fly in a day are unlimited (in accordance with 14-hour maximum for crew duty).

“It’s your airplane essentially for the day and we don’t cap your hours,” Owen said. And since pilots live in the area clients live, frequent customers get to know their pilot, he said.

Fractional ownership is best for those who typically use air travel for 15 or more trips per year, according to the company website. Customers can buy or lease a share in the Phenom 300, Phenom 100 or Challenger 350. Fractional shares start at 20 days (also known as a 1/16 share).

The jet card provides access to up to 10 travel days over 24 months. Airshare only charges the program fee in advance. Customers then simply pay for flight hours as they use them.

Owen said Airshare current operates nearly 50 airplanes – half belonging to the company and half that are managed for owners. As the fleet expands, the company anticipates hiring a significant number of additional pilots, he said.

Buying jets is on the rise along with flying on them. Members of the International Aircraft Dealers Association reported a 52% increase in second-quarter sales of used business aircraft.

Its dealers closed 320 preowned aircraft sales transactions in the second quarter of 2021, up from 211 in the first quarter.