Managers need a strategy to deal with COVID-19 fatigue

Managers need a strategy to deal with COVID-19 fatigue 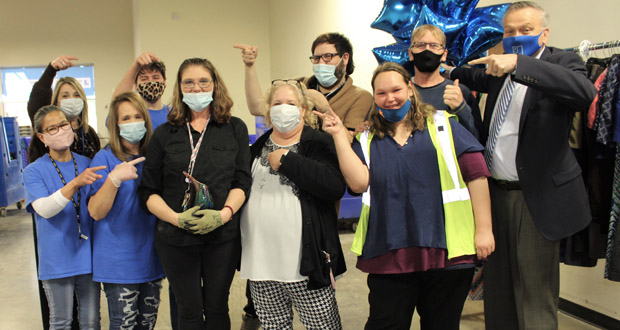 Employees at the Goodwill Store at 741 SW 19th St. in Moore congratulate Store Manager Angela Liddiard, center, recipient of the Pam Henry Spirit of Mission Award. Businesses and nonprofits have worked to keep employees connected and engaged during the pandemic. (Courtesy photo/Goodwill Industries of Central Oklahoma)

OKLAHOMA CITY – Working during a pandemic – one year now and counting – has changed forever the way some elements of business are done, while highlighting those things that require in-person interaction to be executed well.

No longer is the focus on employees being at their desk at 8:30 but more on whether they are getting the work done, said Gene Hopper, co-founder of The Mettise Group, based in Oklahoma City.

Employees have proven they can work from home, many while juggling their children’s distance learning. But what they can’t do is bounce ideas off one another around the watercooler.

“The fundamental element of high-performing teams is trust,” she said. “Trust is one of the hardest things to build remotely.”

The consultants at Mettise talk with 150 CEOs a month and consistently hear about the COVID-19 fog everyone is in.

“What we see so much right now is it’s the last quarter-mile of a marathon. Your form is off and you see the finish line and you just want to collapse,” Hopper said.

Fatigue is affecting employees at all levels, including CEOs.

Employees might feel slighted because good managers who know it’s important to give workers a pat on the back might be too overwhelmed and exhausted to do it, she said.

Business training course provider The Hub Events recently surveyed 1,115 employees and reported more than half said their managers had become less empathic as the pandemic has worn on and aren’t noticing signs of staff burnout. Nearly one-quarter said their managers seemed fatigued themselves.

“Things don’t come across well in a text when you are fatigued, so people are eager to get back together,” Hopper said.

In the meantime, companies are finding creative ways to boost morale.

Hopper said one legal firm gave everyone a tiny trophy with instructions to award it to someone who has demonstrated company values during the pandemic. Many firms have had virtual happy hours or other virtual social events at the end of the workday.

Companies also have provided mental health information and resources, with some CEOs sharing their own struggles, she said.

Jim Priest had just come on as CEO at Goodwill Industries of Central Oklahoma Inc. when COVID-19 hit and all the Goodwill stores were closed for six weeks. The nonprofit furloughed 600 employees.

Priest is a big believer that “culture is king” in an organization, and even more so in these stressful times.

How could he stay connected with those 600 workers, most of whom he never met? He started by shooting short videos on his phone and sending them out to everyone. Each one included the phone number for a counseling service that is free to employees.

The workers were given one week’s pay and allowed to keep their benefits, while the skeleton staff working in the corporate office helped them file for unemployment benefits, Priest said.

After the workers returned, Priest continued weekly videos at work sites that put employees in the spotlight.

“It emphasizes the high-touch part of our culture,” he said. “We don’t just want to be a place to work, we want to be a family.”

And rather than canceling large employee appreciation events, workers were recognized at individual work sites.

Goodwill leadership also revised some policies like removing barriers to promotion and relaxing the dress code, Priest said. “It’s the small things that have the cumulative bigger impact.”