Lights at the end of COVID-19 tunnel?

Home/Business, COVID-19/Lights at the end of COVID-19 tunnel?

Lights at the end of COVID-19 tunnel? 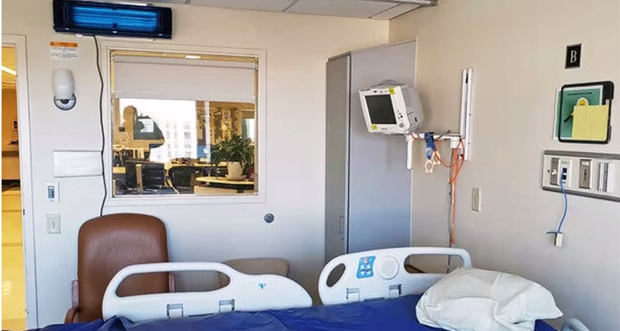 UVC lights employed here have been used to kill airborne pathogens in medical facilities for years and may now be used in more commercial settings to reduce spread of COVID-19. (Photo Dr. Salmaan Keshavjee, START Coalition)

Real estate developers and management companies have an extraordinary power to alter the course of the pandemic and future public health threats, according to an Oklahoma City real estate executive who is also part of a nationwide initiative to combat the virus.

“As a real estate guy, I believe I have the ability to impact people’s lives far greater than anything else they do in their day,” said Mark Beffort, CEO of Robinson Park properties in downtown Oklahoma City and CEO of commercial real estate firm Newmark Grubb Levy Strange Beffort, during a teleconference with the Greater Oklahoma City Chamber on Friday.

“People spend eight, 10, 12 hours a day with me in my facilities and I think it’s incumbent upon me to make sure I provide a safe, healthy environment for them,” Beffort said.

Beffort spoke to chamber members not only as a “real estate guy” but as part of the START Coalition. Oklahoma City is one of five sites selected nationwide to take part in the START Coalition initiative, a panel of the nation’s leaders in the fields of health, education, research and commerce assembled to identify and implement effective ways of thwarting the spread of COVID-19. The team includes experts from Harvard Medical, Stanford Medicine, Purdue University Research Foundation, OU Medicine, and the University of Alabama.

One of the promising technologies START is exploring is the use of a type of ultraviolet light called far-UVC, which is capable of killing more than 99.9% of airborne coronaviruses and is safe to use around people. UVC light fixtures are currently in use in medical facilities around the country and in public spaces around the world. The lights typically are installed near the ceiling, at a safe distance from people but within the space where they can kill pathogens floating in the air. The technology can be used to make businesses, schools and other facilities safer.

“Our goal from the very beginning is how to make public places safe from COVID-19,” said Dr. Salmaan Keshavjee, professor of global health and social medicine at Harvard Medical School and a member of the START Coalition who also spoke at Friday’s teleconference. “If we don’t do this rapidly we are not going to be able to avert a crisis in the business community, with businesses and restaurants and other people going out of business and of course great loss of jobs.”

Keshavjee has been able to apply his 20 years of study regarding tuberculosis – another airborne, highly contagious and deadly disease – toward the effort to combat the coronavirus. The use of ultraviolet light to combat tuberculosis is not new and is proven effective; a study showed that use of UV light in Philadelphia schools in the 1940s virtually eradicated the disease.

As more information becomes available about COVID-19, researchers have identified transmission from droplets – heavier bits of fluid that travel only a few feet – and aerosols – smaller particles that may linger in the air for long periods of time and then come to rest on surfaces, said Keshavjee. While masks and sanitizing may effectively deal with droplets, aerosols can be addressed through air filtration systems. The solution may prove very effective in elevators – enclosed spaces where distancing is not possible.

The technology could become part of the design for commercial and public spaces well into the future, Beffort said.

“If I have any say about it, absolutely,” Beffort said. But private developers and management companies cannot be forced to implement the technology, and some will not want to take on the added cost, he said.

“I do believe, in my opinion, that if you are not willing to make changes that create a healthy safe environment, your particular piece of real estate will not thrive,” Beffort said. “I think it is incumbent upon everyone to do it.”