Experts, ABA do not recommend replying to bad online reviews

Experts, ABA do not recommend replying to bad online reviews 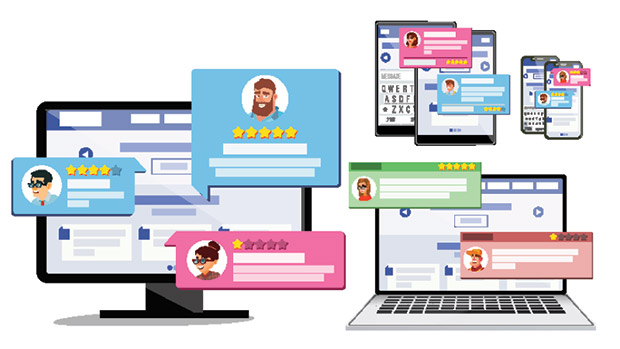 Online reviews are an essential part of decision-making for many — whether they’re ordering dinner from a restaurant or choosing a lawyer.

Statistics from Broadly, a company that helps businesses manage their online reviews, found that 84% of customers trust online reviews as much as personal recommendations. Seventy percent of clients are also willing to travel farther to work with an attorney who has better online ratings.

Potential clients’ faith in online reviews is welcome if a lawyer or law firm under consideration has a five-star rating, but a single bad review can have an ongoing harmful effect. Broadly found that one bad review from a disgruntled client will turn away 30 clients on average.

Some lawyers may be tempted to fire back by leaving a less-than-favorable reply, but doing so can be professionally risky. The American Bar Association released guidance this year about responding to online reviews.

Professor Andrea Schneider, who teaches courses on lawyer ethics at Marquette University Law School, said ABA Formal Opinion 496 comes in response to attorneys who have violated ethics rules while defending themselves in their online replies. She said one of the biggest ethical concerns with responding to online reviews, especially critical ones, is that lawyers will often start revealing client information without thinking about it.

Wisconsin Supreme Court Rule 20:1.6 prohibits lawyers from disclosing any information about a client’s representation without the client’s consent or authorization — with few exceptions.

“Arguably even the fact that a lawyer is representing a client is their confidential information,” Schneider said.

If clients haven’t filed a grievance against a particular lawyer with the Office of Lawyer Regulation, a heated response could not only encourage them to do so but also hurt the lawyer’s case if the OLR’s investigation results in a formal complaint.

“You’ve got to be careful if you are responding in terms of your tone to not exacerbate the situation to where your response further inflames the client,” Schneider said.

Andy LeDuc, vice president of digital strategy and operations at Mueller Communications in Milwaukee, has advised law firms and business owners in other industries on managing their online reputations. He said the most important thing to remember when considering how to respond to a review is that the person who posted the review isn’t the only one who will see it.

“The audience of this review is every future or potential client,” LeDuc said.

Although all this may sound like common sense, it can nonetheless be difficult to exercise restraint in practice, especially at times when criticism feels personal.

“A bad online review done to a local business is an attack on something that’s oftentimes what you’ve put your entire life into building,” LeDuc said, “and here somebody is publicly trying to shame you. That makes it really hard to not respond.”

The best step to take, according to these experts and the ABA, is to leave critical reviews alone. Responses can make reviews more visible and easily lead to ethical violations.

“There are different rules for lawyers than there are for the restaurant down the block that delivered cold pizza,” Schneider said. “We have to remember that as a profession, we have more guidelines on our behavior.”

If a lawyer or firm isn’t comfortable leaving a review alone, LeDuc advised responding with something to the effect of “My professional obligations do not allow me to respond as I would wish” and asking posters to call about their complaints so the discussion can be taken offline.

Lawyers can take several steps to have a review removed, but they’re often difficult and uncertain to work. Usually reviewers are the only ones who can delete posts, so one option would be to call posters to try to convince them to remove their comments.

However, lawyers or firms that are considering calling a client should be careful. Such calls could run afoul of SCR 20:8.4, an umbrella rule defining misconduct for lawyers.

“Depending on how often you contact your client because you’re annoyed about the review, you’re now engaged in harassment,” Schneider said.

Google also gives users the ability to flag reviews that violate its policies. The search giant will consider taking down reviews that contain irrelevant, illegal, inappropriate or offensive content; give rise to conflicts of interest; or impersonate a person, company or organization. Depending on the content of a review, attorneys may have success with their requests for removal, but LeDuc said Google often isn’t accommodating to businesses in this situation.

To combat the harm caused by critical reviews, LeDuc and Schneider advised burying the bad with the good. Soliciting good reviews from satisfied clients, even before a bad review becomes a cause for concern, will improve ratings and give the public a more accurate representation of a lawyer or a firm’s work.

“The day (clients) leave your office for the last time after a positive outcome, you’re their favorite person,” LeDuc said. “That’s the time to say that it’s really going to help others find us if you write us a good review.”

He recommended that lawyers make it a habit to ask satisfied clients for good reviews while their cases are still fresh in their minds. The longer attorneys or law firms wait, the less likely they will be able to persuade someone to take the time to leave a review.

Schneider said attorneys and their firms should also not simply dismiss what’s said in critical posts. If the bad reviews are adding up, there may be a pattern of behavior or process that needs to be remedied. If a particular criticism comes as a surprising, it may be worth having someone other than the lawyer involved in whatever matter is up for discussion reach out to the client to find out what happened.

“Our lifeblood is referrals and repeat business,” Schneider said. “A respectful inquiry into what went wrong might mean they’ll really appreciate your willingness to learn, and that ends up being the final thing that kicks it to repeat business.”

Although it may be difficult to read bad reviews and deal with whatever underlying deficiencies they might reveal, knowing what people are saying about an attorney or firm is far better than ignorance.

“If you don’t control your online reputation, someone else will,” LeDuc said.