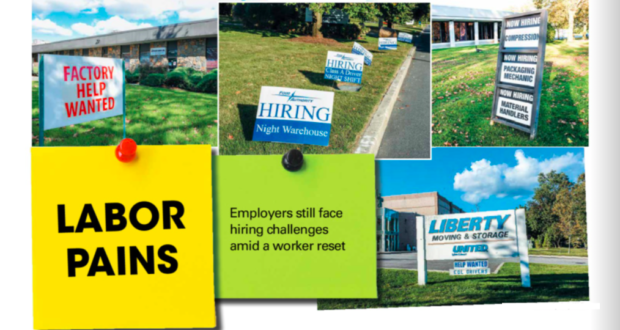 Turns out it wasn’t the extra unemployment benefits after all.

Despite the claims by employers that the federal government was keeping unemployed workers from taking jobs by providing an extra $300 a week, businesses are still struggling to fill open positions, long after those payments ended.

While the reasons for the ongoing hiring challenges are up for debate, it appears that the lingering COVID-19 pandemic has triggered a major reset amongst a workforce that is now re-examining its options.

As of last week, there were 10.4 million unfilled jobs across the country, enough jobs for the 8.3 million currently unemployed Americans, with 2.1 million jobs left over. The problem for employers is that people aren’t rushing to fill them.

September saw the smallest monthly gain in payrolls so far this year, with 194,000 new employees. That ran counter to predictions by some analysts and employers that the end of emergency federal unemployment benefits would move more people to find jobs.

In fact, a massive number of Americans recently quit their jobs. Some 4.3 million people left their jobs in August, the highest number of resignations on records dating back to Dec. 2000, and up from 4 million in July, according to the U.S. Department of Labor.

In a New York Times op-ed published last week, economist Paul Krugman called the phenomenon a “revolt of the American worker,” writing that the pandemic has led many U.S. workers to rethink their lives and ask whether it was worth staying in the lousy jobs too many of them had. Krugman said that while America is a rich country, it often treats many of its workers badly. He noted that adjusted for inflation, the typical male worker earned virtually no more in 2019 than his counterpart did 40 years earlier.

The shifting paradigm is also empowering workers to demand more from their employers, many of whom are realizing record profits. Though many companies have offered increases in salaries to try to attract and retain staff, strikes have impacted several industries lately and unhappiness among employees has sparked a recent resurgence in labor unions.

“When you factor in inflation, the American workforce has not moved forward,” says John Durso, president of the Long Island Federation of Labor. “I think the pandemic has exacerbated that situation and really brought it home. People have decided to look at what their priorities are. The pandemic has caused people to say, ‘You know what? We’re here today but we literally could be gone tomorrow.’ That has caused people to re-evaluate themselves.”

Cantor, who discusses these issues on his weekly News12 show “The New Normal,” added that he doesn’t think increases in pay will serve employees in the long run.

“I think that if you have too much of a wage increase, which means costs will go up and that’s only going to increase inflation which will be very detrimental to the workforce, especially the ones that are earning minimum wage or just above,” Cantor said.

When it comes to hiring, New York appears to be doing better than most other states, with 0.45 job openings per each unemployed individual, according to CareerCloud.com. By comparison, states like Nebraska, New Hampshire and Vermont have more than three times as many job openings per unemployed person.

And though the jobs picture appears to be improving, many Long Island businesses are still beating the bushes to fill open positions.

Huntington Station-based Electronix Systems, a provider of central-station alarm and fire detection systems, currently has about 90 employees, but it is struggling to find more.

“We’ve been forced to consider hiring subcontractors because of the difficulty in finding employees,” says George Natale, the company’s general manager, who’s been with the firm for 21 years. “You can hardly find experienced people. This is the toughest time for hiring in my experience with the company.”

For Steven Vogel, founder and president of Deer Park-based Event Kings, said that since corporate events and weddings have come back in a big way since the spring, hiring has been an issue.

“We had to scramble for people to work the events,” Vogel told LIBN. “My wife, daughter and I had to step in and work more events than ever. It’s still hard to find on-site event organizers to hire. I think people got complacent from staying home and still fear the pandemic.”

At Hauppauge-based Signs By Tomorrow, General Manager Peter Facchiano said the company is offering “at least $20 an hour” for entry-level positions and more for experienced graphic designers, but it’s still tough to fill the open jobs.

“A lot of people respond to our call for employees, but they don’t show for interviews,” Facchiano said. “I think people are still a little afraid of the pandemic. Many people want to work remotely, but I need them to be here most of the time.”

Jason Kahen, regional sales director for ACV Enviro in Medford, said the industrial waste management services company is looking to hire around 25 people as truck drivers and equipment operators. The firm is offering between $20 and $30 an hour for entry-level positions, but it hasn’t been easy to find employees.

“There’s a national driver shortage,” Kahen said, blaming stiff competition for new hires as a big reason. “I think it’s difficult because of the plethora of employment options people have out there.”

“There’s so much competition for people,” Czajka said. The company is seeking to hire as many as 50 people to fill roles as architects, engineers, accounting and office staff, with salaries ranging from entry-level to six figures for accomplished professionals.

“Though we offer some work-from-home options, our preference is that you work in our offices,” he said.

At Dime Bank, CEO Kevin O’Connor acknowledged that the struggle to find workers continues, as hiring competition ramps up and prospective employees find themselves at a crossroads.

“We’ve had trouble hiring people,” O’Connor said. “For a long time, there was no movement. But now as the world begins to open up, people are deciding what they want to do with their lives.”

O’Connor said the bank, which has 60 branches from Manhattan to Montauk, currently has about 40 open positions, including jobs as credit underwriters, loan administrators and servicers and compliance officers, with entry-level salaries starting at $40,000 a year.

Though Dime does offer work-from-home options for some support roles, O’Connor says it’s always looking for people to work in its bank branches.

“This is the most difficult hiring landscape that I’ve ever experienced in the banking field,” he said.

For Krysti O’Rourke, director of career services at Five Towns College in Dix Hills, the worker shortage means opportunities for the college’s students.

“So many companies have been calling us for interns and employees that I can’t get the information out fast enough,” O’Rourke said, adding that employers have been asking the school for part-time workers in entertainment, engineers and audio technicians. “They’re not getting that pool of jobs applicants like they used to. They’re reaching out to schools like ours for qualified candidates.”

For some businesses, the hiring picture seems to be improving. Kenneth Wygand, sales director at Hauppauge-based Custom Computer Specialists, said the IT consulting firm is looking for experienced and entry-level salespeople, as well as technical staff.

“It’s been one of the hardest times to hire good people,” Wygand said. But he added that over the last few weeks, he has seen a “significant increase in the length and quality of experience of new applicants,” and applicants have lately been “more responsive” to interview opportunities.

Meanwhile, some prospective employees have paused their job searches to go back to school and learn new skills with the goal of forging more meaningful careers.

“I think that if people are finding that they need to show up for work but don’t have the skills, now’s the time to upgrade their skillsets to access the jobs that employers are posting,” Cantor said.

And while the pandemic continues to complicate the hiring picture, Durso says the struggles to find and retain workers should be teaching business owners a valuable lesson.

“There is a resurgence in the American workforce demanding recognition and demanding to be appreciated by the employers and they’re not going to put up with the abuse,” said Durso, who’s Local 338 represents about 13,000 workers, mostly in grocery stores and drug stores, said the supermarket industry has been struggling to hire employees for the last couple of years.

“I could put 200 people to work tomorrow at various positions,” said the union leader. “But look at what’s been going on. Employees were being abused because they asked customers to put on masks. There would be fistfights in the store. There’s some point where workers say, ‘I’ve had enough of this,’ and they’re not going to put up with it. People are willing to work, but they want to be treated right.”