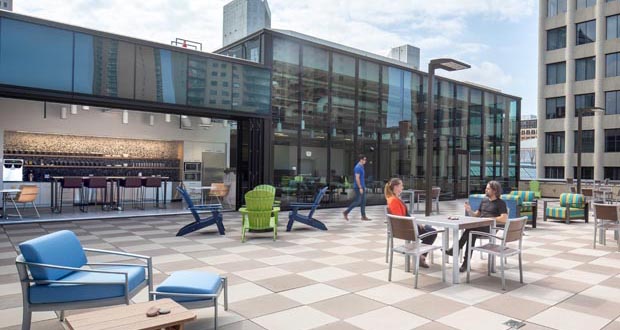 The Twin Cities’ first WELL-certified building, The 428 Building, is the corner of Minnesota Street and Seventh Place in downtown St. Paul. The building, a former Woolworth store, opened in August 2018. (Submitted file photo)

As employers continue to make decisions about their workers’ return to the office, they face a wide range of concerns from employees’ regarding health and safety. New protocols are being created that cover everything from seating arrangements and meeting size restrictions to mask-wearing guidelines and testing workers for symptoms of illness as they enter the building.

Human resource executives predict companies that make a conscious effort to create healthy work environments in the post-pandemic era will have a critical edge in recruiting and retaining top talent. To that end, a shift to so-called healthy buildings may become a corporate priority.

Whether that means retrofitting existing office space to meet healthy building standards, or moving into office space that has invested in these upgrades is a decision that is different for every company.

The World Health Organization (WHO) defines a healthy building as a space that supports the physical, psychological, and social health and well-being of people. While the concept of designing buildings to promote well-being is not new, the certification of buildings that meet certain standards is more recent. The certification effort is led by groups such as WELL, Fitwel and the Living Building Challenge by the International Living Future Institute.

“It’s one more feather in a company’s cap to be located in a WELL building. It’s definitely attractive to employees,” said Jennifer Kruse, owner and principle consultant at Strategy 17, a Minneapolis sustainability consulting firm. “With any of these certifications, you’re verifying that your building has undergone some rigorous testing and is built to be healthy.”

The WELL Building Standard was established in 2014 and is certified by the Green Business Certification Incorporation (GBCI), which also administers the LEED certification program and the LEED professional credentialing program. The performance-based system “measures, certifies and monitors features of the built environment that impact human health and well-being through air, water, nourishment, light, fitness, comfort and mind.”

Harvard professors Joseph G. Allen and John D. Macomber, the authors of “Healthy Buildings: How Indoor Spaces Drive Performance and Productivity,” argue that billions of dollars are spent on engineering features to construct and upgrade office buildings to attain LEED certification, yet the return on investment is much greater for a company that invests in improved ventilation, air quality, temperature control, lighting, noise and other characteristics of work space that fall into the WELL certification category.

Reinforcing the importance of healthy buildings is the 3-30-300 rule of real estate that was created and popularized by the global facilities management company JLL. The rule examines relative cost per square-foot across three factors — utilities, rent and people. For every $3 a company spends on utilities, it spends $30 on rent and $300 on payroll.

“We’re really missing the boat here if we’re chasing a few nickels of energy efficiency by stretching out the fans and filters, while we’re losing thousands of dollars around human productivity and illness,” Macomber said in a telephone interview.

Pat Wolf, founder of St. Paul-based Commercial Real Estate Services Inc., is among those leading the WELL certification charge in the Twin Cities. She is also part of the ownership group at HFS Properties, a local commercial real estate company that owns and manages several Twin Cities office buildings, including the Twin Cities’ first WELL-certified building, The 428 Building on the corner of Minnesota Street and Seventh Place in downtown St. Paul. The building also is LEED Silver certified.

The 428 Building occupies a former Woolworth store that closed in 1994. The building sat vacant until HFS Properties secured ownership in 2017 and started its remodeling effort. Two floors were added to the existing three-story building, while the installation of floor-to-ceiling windows on the second and third floors turned a previously dark space into spacious, naturally lit work space.

The 428 Building opened in August 2018. Wolf said it currently has two tenants leasing about 35% of the building. Wellworth, a coworking business, occupies approximately 7,500 square feet of sunlit space on the building’s fifth floor. ENGIE Impact, a sustainability and energy management company, leases all of one floor and one-quarter of another, according to Wolf. She said both tenants were specifically looking for a building that offers the type of health-focused features that The 428 provides.

“We wanted to build a building that was based on what we heard tenants wanted and that was different than anything else that was being provided in the Twin Cities,” Wolf said. “Putting healthy building systems into properties is going to be common going forward. If you are building a Class A office building, I think getting WELL and LEED certified is just going to be part of what developers need to do. The larger enterprise companies that embrace health and wellness are asking for it already.”

Kruse said more developers in the Twin Cities are working toward earning WELL certification for their buildings. Her company, Strategy 17 (the name is a reference to the United Nations’ 17 sustainable development goals), helps businesses submit the paperwork that is part of the process. The Twin Cities lags behind East and West Coast cities in terms of WELL-certified buildings, Kruse said, but interest is increasing.

MSR Design, a Downtown Minneapolis architecture firm with an office in a former bank on Marquette Avenue, earned a Living Building Challenge 3.1 Petal Certification from the International Living Future Institute. It is the first building in the Twin Cities to earn that distinction, which is based on criteria related to beauty, equity and inclusion, and use of environmentally friendly materials.

Kruse admits there is a cost-of-certification hurdle that is hard for many developers to justify. WELL certification requires onsite performance testing by an approved WELL assessor to ensure healthy building outcomes are being achieved. A building is certified for three years, after which it must be recertified. This offers an opportunity for ongoing improvements and higher certification levels.

Commercial landlords typically want to operate a building at the lowest possible cost. Macomber and Allen speak to the cost hurdle in their book. They hope that increased awareness of the benefits of healthy buildings will help commercial building developers understand they can get a premium in rent in strong markets and provide a marketing advantage when they need to keep their space occupied in down real estate markets.

The intense focus on environmental issues in an era of global warming pushes LEED certification to the top of developers’ priorities over healthy buildings, whether a project is a new build or remodel. That flies in the face of aforementioned evidence that maintaining the health of a building’s occupants provides exponentially higher returns than ensuring a building’s energy efficiency.

A 2000 study found that 57% of all sick leave was due to poor ventilation. The findings at that time — 20 years ago — suggested that a net savings of $400 per employee per year may be obtained with increased ventilation.

“Consider the talent you will want to attract in a post-COVID 19 world,” Allen and Macomber state in their book. “Today, businesses need to understand that prospective hires will not just be interviewing you, they will be interviewing your buildings. And you can be sure that future employees will be paying close attention.”