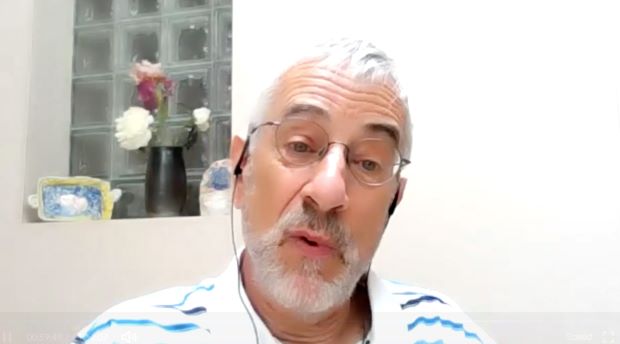 Ken Simonson, chief economist of the Associated General Contractors of America, speaks on Wednesday during a Builder Breakfast webinar on “the future of the construction supply chain.” (Zoom image)

PORTLAND, OR — For anyone who follows construction statistics, Ken Simonson’s name is a familiar one.

For nearly 20 years, the chief of economist at the Associated General Contractors of America has been keeping tabs on rises and falls in key indicators such as construction employment by metropolitan statistical area, state and the U.S. as a whole. His weekly data digest, read widely throughout the industry, is seen by many as a primary means of learning about some of the biggest trends in the industry.

Lately, he’s been devoting plenty of space to rising materials prices and supply shortages. His digest for the week ending May 11 noted such eye-popping facts as that lumber future and steel-price indexes have reached new peaks, at triple or quadruple their lows of last year, and that copper futures reached an all-time high of $4.75 a pound on May 21.

Speaking on May 26, 2021, at a Builder Breakfast webinar from the DJC’s sister publication in Milwaukee, The Daily Reporter, on “The future of the construction supply chain,” Simonson readily acknowledged that the main culprit in all of this has been COVID-19. The pandemic has led not only to an unprecedented demand for the construction of new single-family houses but also renovation projects to make space for home offices and virtual learning.

But COVID-19 was only one of a handful of big disruptors of supply chains in recent years. Also of great consequence have been new tariffs on Canadian lumber, the recent blocking of the Suez Canal by an errant barge and the shutting off of the Colonial Pipeline in the eastern U.S. by a criminal group.

Many construction companies have found themselves locked into contracts that were negotiated when prices were lower and have thus been unable to pass these higher costs on to clients. And even as the pandemic has caused demand for residential projects to spike, it has led to a slowdown in the construction of hotels, dorms and hospital space used for purposes other than treating coronavirus patients. The resulting competition for the few projects left has put contractors under even more pressure to keep bid prices low.

“Going further out eventually the pandemic will be in the rearview mirror,” Simonson said. “But we can see some trends that are likely to stick around. We know that population growth has slowed down sharply.

And that has implications for housing, and for associated infrastructure, roads and water and sewer and so forth, for local retail and for public buildings, such as schools and libraries.”

At the end of Wednesday’s event, Simonson took some time to answer questions viewers. Here’s a short transcript of some of what they asked and his replies (edited for clarity and brevity.)

Simonson: I see several ways of answering that. First, looking back over history, unquestionably the demand for single-family homes made the 2000 recession shorter and milder than it would have been and a lot of other things started recovering a year or two or three years after single-family housing. This gave a lot of people the impression that housing was somehow a locomotive for the rest of the economy and I used to hear, and I still hear sometimes, that non-residential construction, commercial construction, follows housing by six to 12 or 18 months. I think what people mistook for causality was actually just different factors leading to that kind of growth.

But clearly housing starts are a very good indicator for actual residential construction and demand for related things, whether it’s lumber or appliances and so forth.

Q: Any idea, or have you got a gut feeling, on when we can see a softening of the costs?

Simonson: Well, there’s always disagreement about what makes markets move and where prices are going to go next. But right now there’s unusually strong agreement that they’re not going to get back to pre-pandemic lows. A year ago, in September of last year, lumber prices suddenly plunged after hitting record levels and went down, maybe 30 percent or 40 percent. Then things turned around in a vicious way and we’ve been seeing new records pretty much every week, until recently. Just in the last few weeks lumber futures on the commodities exchange of what used to be called the Chicago Mercantile Exchange had another big plunge. But I’m not ready to say: OK the worst is over for lumber and with steel.

So that’s a long answer to say: No, my crystal ball is too cloudy to say if we’re going to see prices start to come down anytime soon. I am pretty confident that they’re not going to get back to where they were two years ago. But that’s not necessarily a bad thing and indicates the economy will heal pretty well.

Q: Some say the price of concrete is going to increase like that of lumber. Can you explain the possible reason for that and what we might see?

Simonson: I’ve seen these “dear valued customer” letters in the last couple of weeks announcing that cement makers in different parts of the country are going to be raising prices anywhere from June 1 to September 1 anywhere from 5 percent to 10 percent.

This is very unusual. And to have it happen at this point in the building season, even near the end of what in northern states is the peak season, I think that’s also very unusual. But I would never say that it’s going to go up the way lumber did that. The demand for ready-mix and pre-cast and pre-stress concrete is much more stable than it is for housing. So I don’t foresee that kind of issue now. I would also say that 15 years ago I was involved in getting rid of a really self-damaging anti-dumping duty on Mexican cement that caused really unnecessary shortages and allocations in many parts of the country.

Since then, very large cement capacity has been built in some parts of the country. But you can still get localized shortages. We had a report that a major cement plant in the Dallas-Fort Worth area was damaged by that freeze in Texas that knocked out power. So you might even feel some impacts from that. Or if the Mississippi River dries up in the spring or floods, you may not get barges moving cement the way you need it.