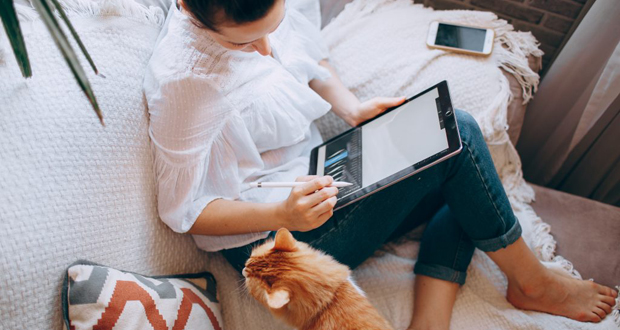 Business executives are increasingly embracing a hybrid model of the workplace post-COVID-19. (Photo illustration by Helena Lopes via Unsplash)

The COVID-19 pandemic forced many businesses to shift to remote working to protect both employees and customers, and now the business world is struggling to convince those workers to give up their home offices.

Even industries that didn’t suffer as badly during the pandemic had to adjust to keep operations going to serve the industry and consumers. For instance, many Realtors reported having the busiest time of their careers during 2020 and early 2021.

Even with remote work from home and virtual home tours, the real estate market in Oklahoma didn’t slow down as much as other industries. The Oklahoma City Metropolitan Association of Realtors had to adjust to keep its operations going to serve the industry and consumers, and OKCMAR President Steven Ligon said the organization allowed employees to work from home with full access to all tools and information and pivoted to online events.

Now, he said, OKCMAR is working to help people who don’t want to return to the old way of doing things.

Realtors aren’t alone. Businesses worldwide are shifting to please employees who want to return to an office setting while also catering to those who prefer to remain remote. That conundrum has created hybrid ways of not only working, but also socializing and creating meaningful connections.

The success of remote work has reimagined how corporate work gets done as well as where the work takes place. PwC, a national consulting and solutions firm, found in a recent survey that U.S. executives and employees are converging around a post-pandemic future with a lot more flexibility, yet few are prepared to completely abandon the office space.

“Some people don’t want to show up in person, because they are now used to virtual continuing education and meetings,” Ligon said. “We are working on hybrid ways to serve them. On the other hand, some people strongly want to connect in person. Even some presenters for events and training prefer that route.”

PwC’s survey found that less than 1 in 5 of the 133 executives and 1,200 office workers they surveyed in November and December 2020 say they want to return to the office as it was pre-pandemic. The rest are considering how to extend remote work options, with just 13% of executives prepared to let go of the office for good. Meanwhile, 87% of employees say the office is important for collaborating with team members and building relationships – their top-rated needs for the office.

By July 2021, 75% of executives said they anticipate that at least half of office employees will be working in the office. In comparison, 61% of employees expected to spend half their time in the office by July.

Another survey showed more extreme results. In a report called “The Next Great Disruption Is Hybrid Work – Are We Ready?,” Microsoft said 54% of Generation Z workers, 41% of the entire global workforce, are debating about resigning from their current jobs.

A U.K. and Ireland survey found that 38% of employees were planning to leave their jobs in the next six months to a year, while a U.S. survey reported that 42% of employees would quit if their company didn’t offer remote working options long term.

To create a social environment, the OKMAR has experimented with various ways to engage its members and employees, like bringing food trucks to its parking lot and hosting a members-only picnic at Scissortail Park.

“It’s a new day, and we’re finding new ways to serve the public and our members,” Ligon said.

A January Gallup Poll found U.S. employee engagement increased to 39% in January, up from 36% late last year. However, experts say that high-quality connections are vital in combating workplace loneliness, especially for remote workers.

National and global companies with a presence in Oklahoma also are changing work expectations. Prudential Financial, for instance, said it plans to use a phased-in approach after Labor Day in which its U.S. workforce would work some kind of hybrid in-person/remote schedule.

Citigroup’s CEO also said the bank’s 210,000 employees will be expected to be in the office three days a week at some point this year, and internal video meetings will be banned on Fridays to ease “Zoom fatigue.”

Google’s workforce will return to a hybrid workweek in September. Employees will work from the office about three days a week, and two days “wherever they work best,” according to a company memo.